Co-ownership offers hope to those priced out of housing market 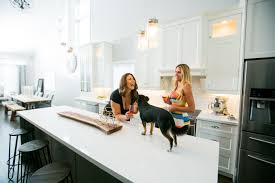 Please Click Image For Information
For many Canadians, their first introduction to home co-ownership might have been through The Golden Girls – the sitcom featuring four friends, living together under one roof while respecting each other’s personal space (for the most part).Now, home co-ownership is becoming a reality for more Canadians as house prices become increasingly out of reach for some homebuyers. The premise is simple enough – multiple people pool their money to buy a home that would otherwise be unaffordable for them individually. The process can take a number of different forms such as unrelated people buying a home together, different generations of the same family buying a property, or an agreement where there are multiple owners but only one of them actually lives in the home.Lesli Gaynor said she co-purchased a home with two friends when she was 25 years old, a move that helped her buy her own house several years later. She said her home purchase wouldn’t have been possible without taking that initial co-owned step onto the property ladder.She’s such a strong believer in co-ownership that she founded GoCo Solutions, a website that educates people on co-ownership and helps facilitate such transactions.She has seen co-ownerships increasingly gain in popularity in recent years, especially in hot housing markets like in the Greater Toronto Area where home prices are sitting at all-time highs.“It's not just the vulnerable anymore,” said Gaynor, who has a background in social work, in an interview. “I'm getting approached now from a much wider range of people wanting to do this.“Housing is a determinant of health. We know without secure housing and food security, and income security, people are floundering. People are not going to be able to manage the other stressors in their lives as well.”
Walking with you every step.
By using our site, you agree to our Terms of Use and Privacy Policy